The University of Central Oklahoma’s Central & South American Art Collection contains 22 works of art from multiple cultures. The artistic traditions represent the Huetar and Chira cultures of Costa Rica, Inca/Sican culture, Mayan civilization, Teotihuacan culture, and modern Mexican festival arts. The objects range in date from the 8th century to the 21st century and exemplify traditional, indigenous art, as well as material culture of the Post-Columbian exchange. The Central & South American Collection represents the diversity of American cultures while fostering global competency and inclusiveness and providing students with opportunities to learn and research. 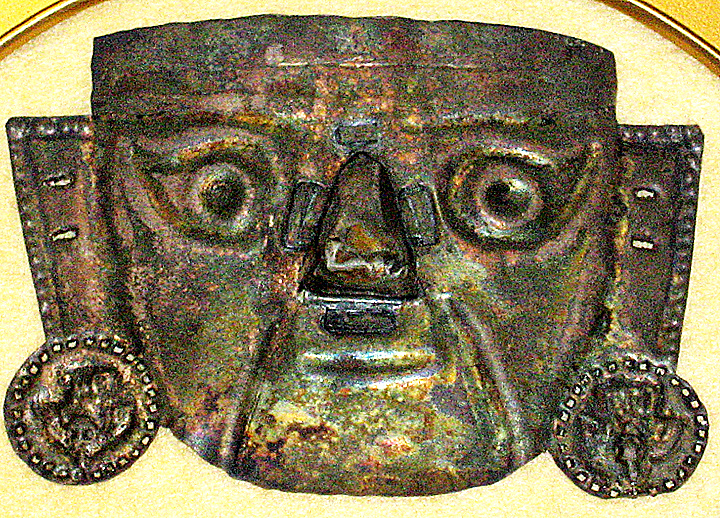 This brass object resembles the depictions of deities and the funeral masks of the Sicán culture (750-1375 CE) and the Inca Empire (13th century-1572 CE). The object features a small, copper-alloy face, crafted in typical Sicán style. It is possible that the face was once part of a larger, more elaborate piece, as Sicán pieces were often designed piecemeal. 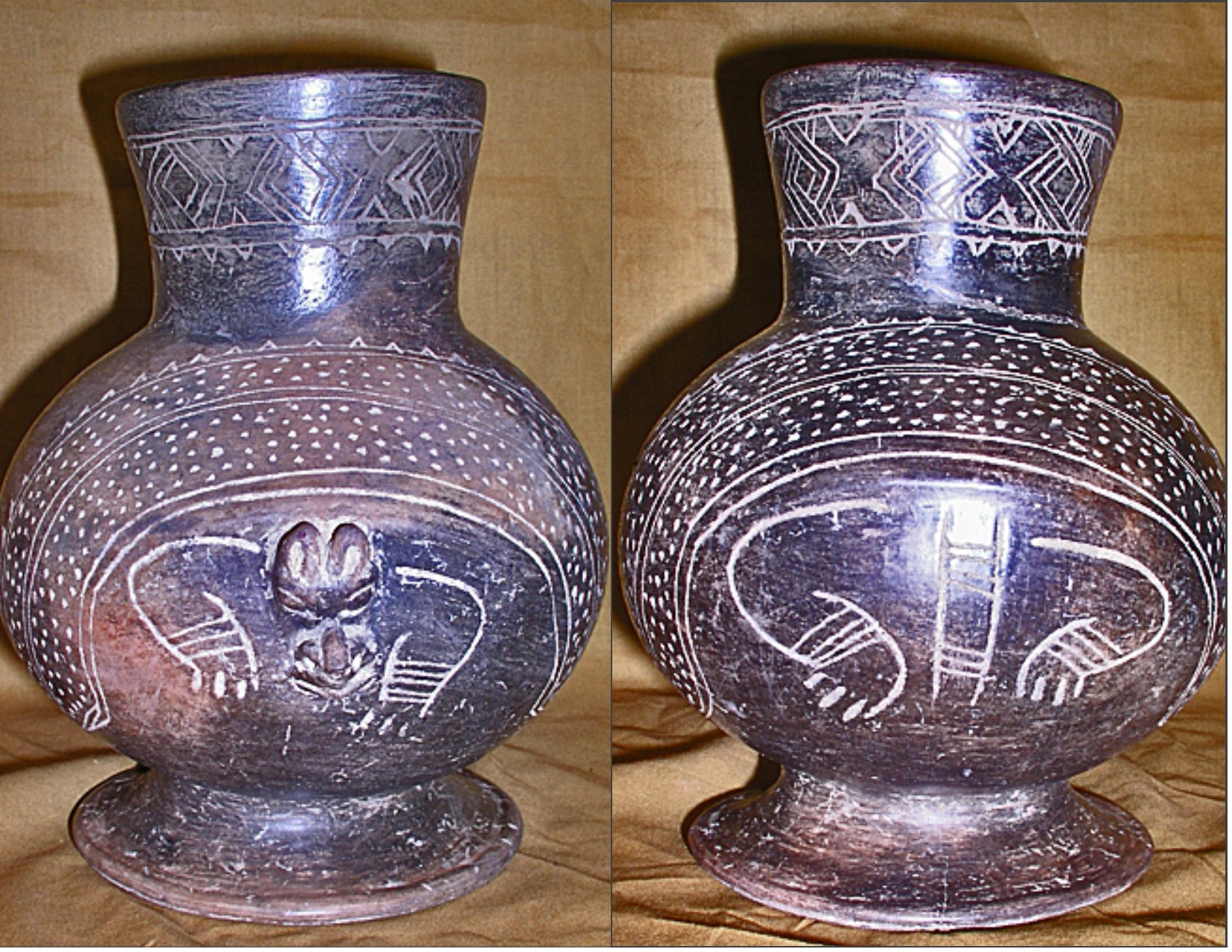 The jaguar is an important symbol among many Pre-Columbian cultures. It is usually associated with the rain god. c. 1200 CE. (Kirkpatrick Foundation, Gift of E. Vargas) 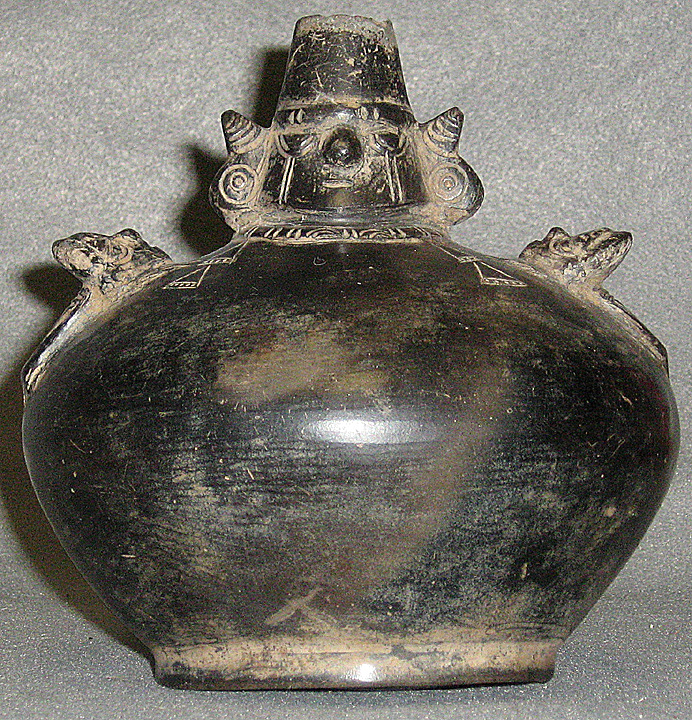 This vessel design resembles those of the Sicán culture. It depicts a Sicán lord and a pair of felines. (Kirkpatrick Foundation, Gift of Mr. Jerome L. Joss) 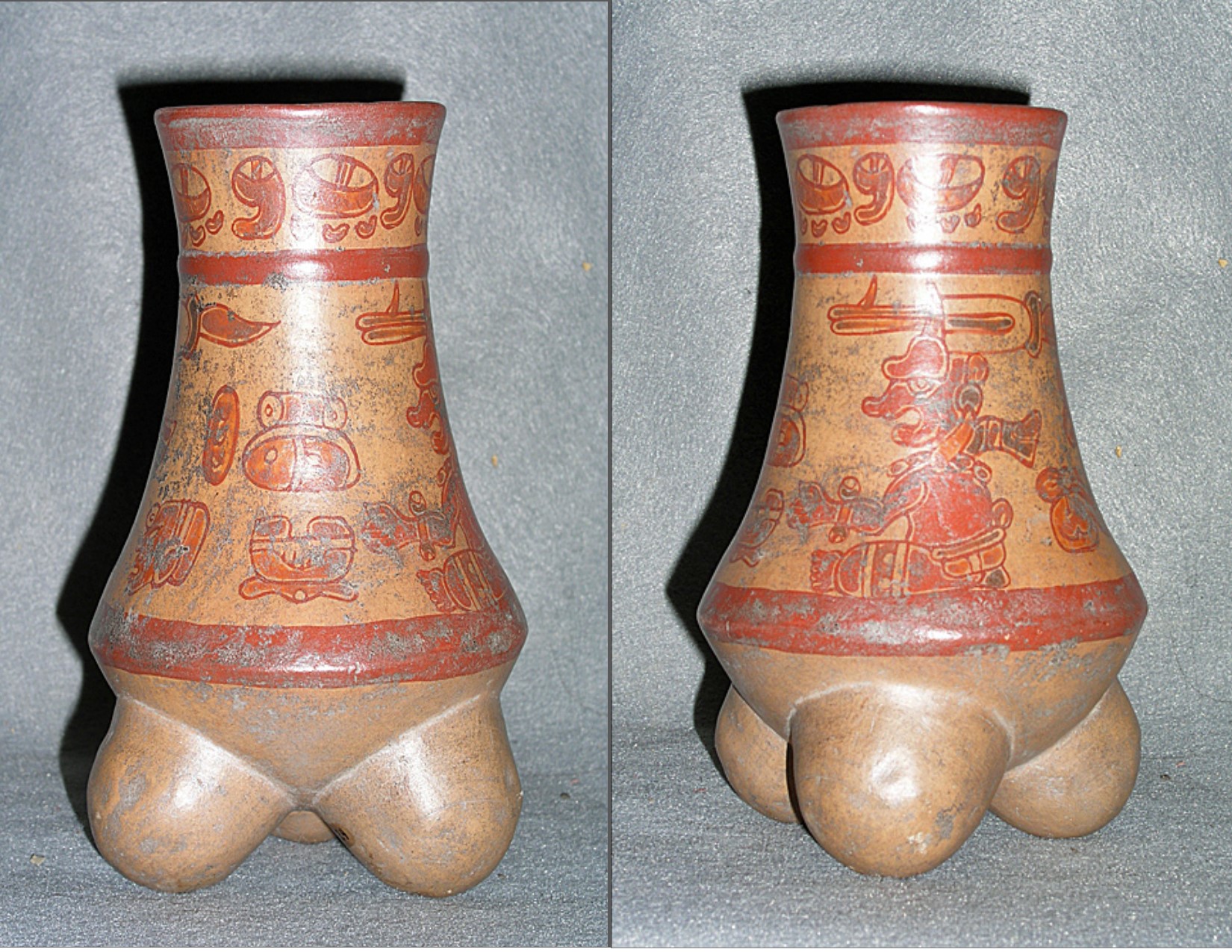 The Mayan Civilization/Empire (1500 BCE to 900 CE) was one of the most powerful Meso-American societies. The Maya were often farmers, growing foods such as squash, peppers, manioc, beans, cacao, and corn. They were also great builders of stone pyramids, crafters of gold and copper objects, master sculptors, skilled astronomers, and the developers of a hieroglyphic system of writing. Mayan society, though it evolved over time, typically adhered to an extremely hierarchical structure. Social class and lineage were important and often determined the trajectory of one’s life. Scribes and artists, for example, belonged to a high social class and often inherited their trades from older family members. 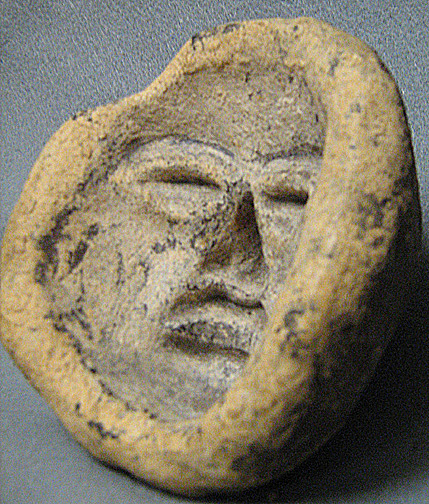 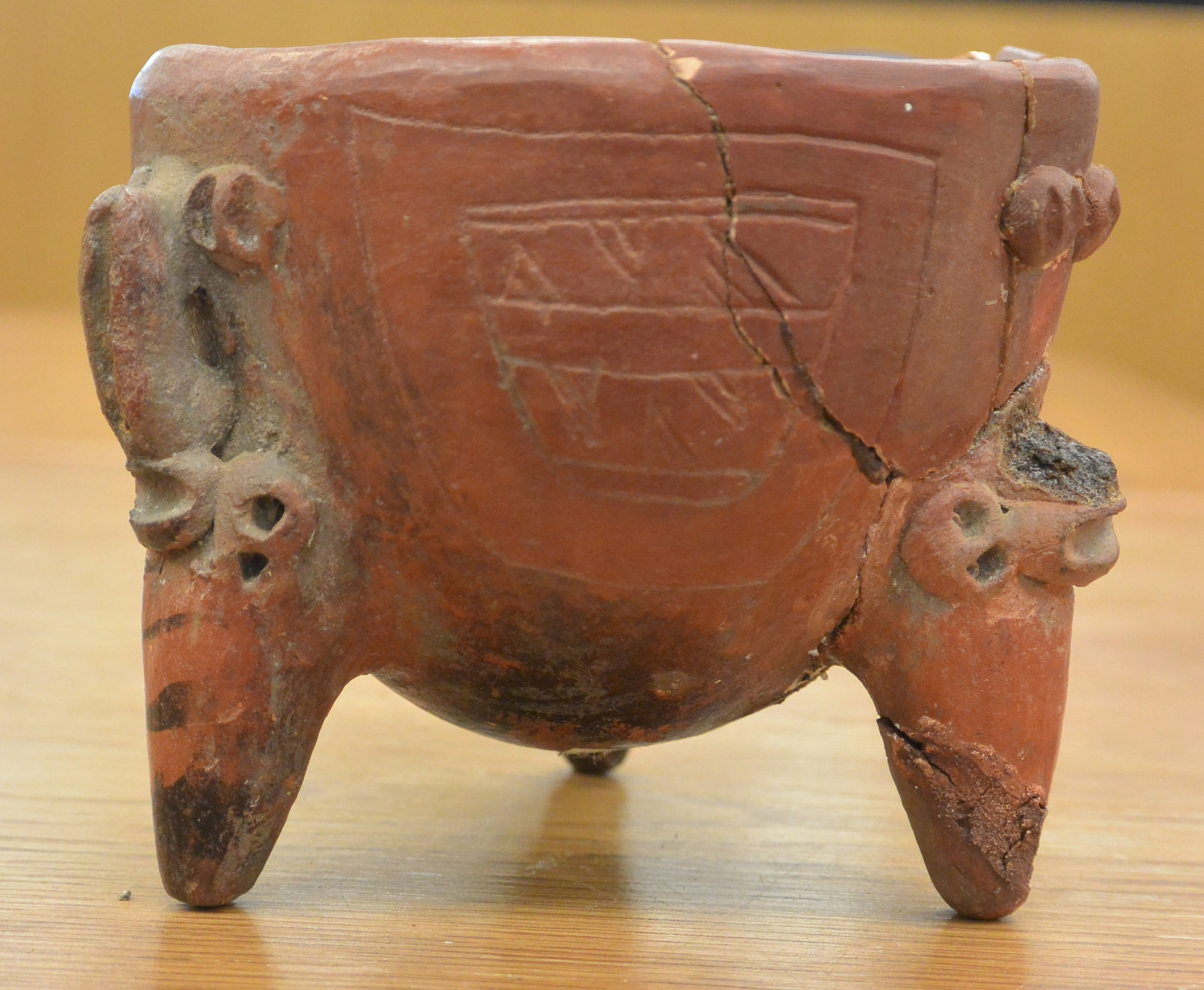 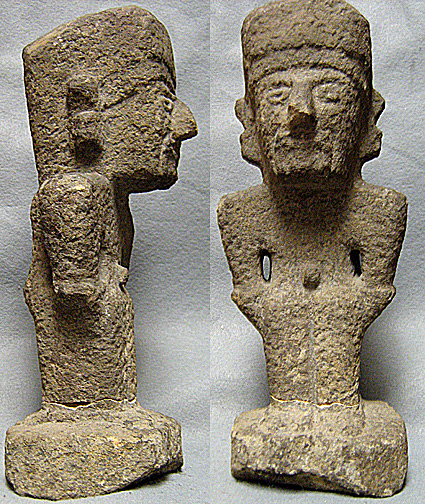 This stylized human figure possibly represents a ruler. The feet and base are broken off from the main part of the figure. It is dated c. 1200 CE. (Kirkpatrick Foundation, Gift of Mr. Jerome L. Joss)

This stylized male figure (c. 1300 CE) is wearing a helmet-like head covering, and is accented with dark markings all over the body. (Kirkpatrick Foundation, Gift of Mr. Jerome L. Joss) 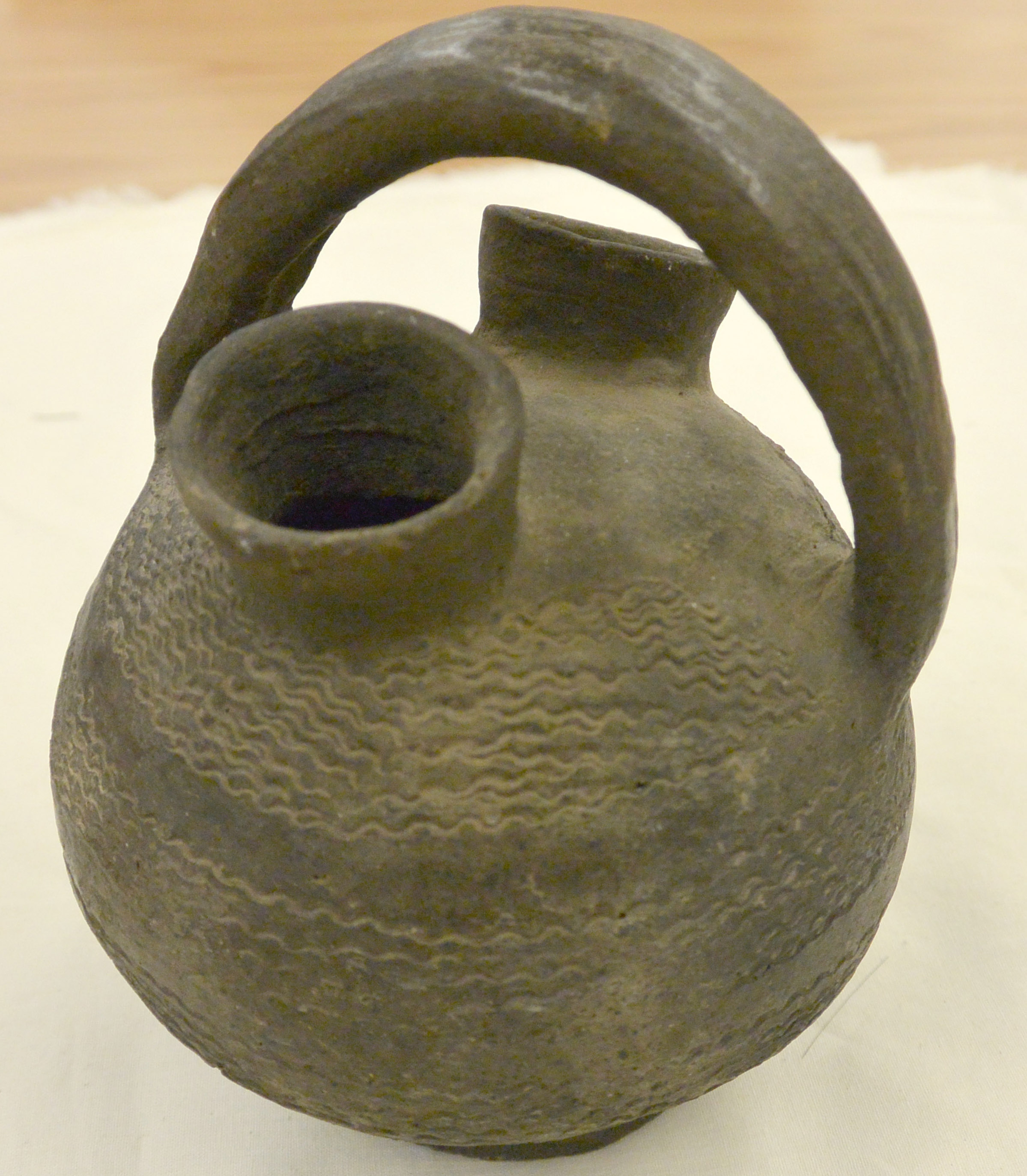 This clay vessels are more decorated than usual household vessels, as well as the spouts make it difficult to clean the insides, this was probably used as a ceremonial vessel for the pouring of libations. 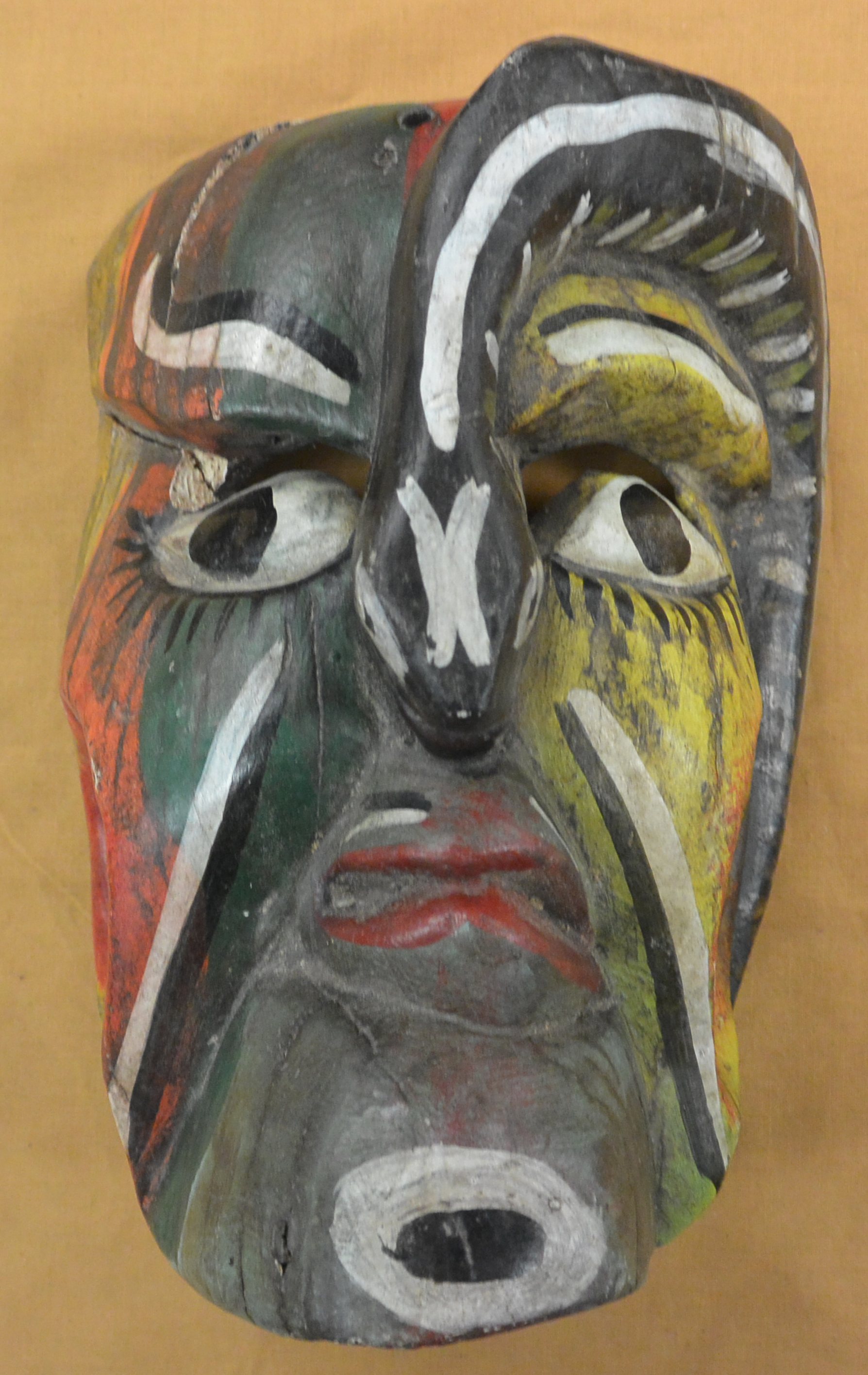 During the Mexican vice-regal period (1521–1821), the syncretizing of Catholicism with indigenous beliefs was expressed in dance and drama. These performances incorporated masks similar in design to this one. The mask resembles the ones found in the Lake Patzcuaro region and the Tepoztlán Valley in Mexico during the late 1940s and early 1950s. Similar masks are commonly found in the Mexican states of Guerrero, Michoacan, Puebla, Oaxaca, and Chiapas, as well as in Guatemala and Peru. 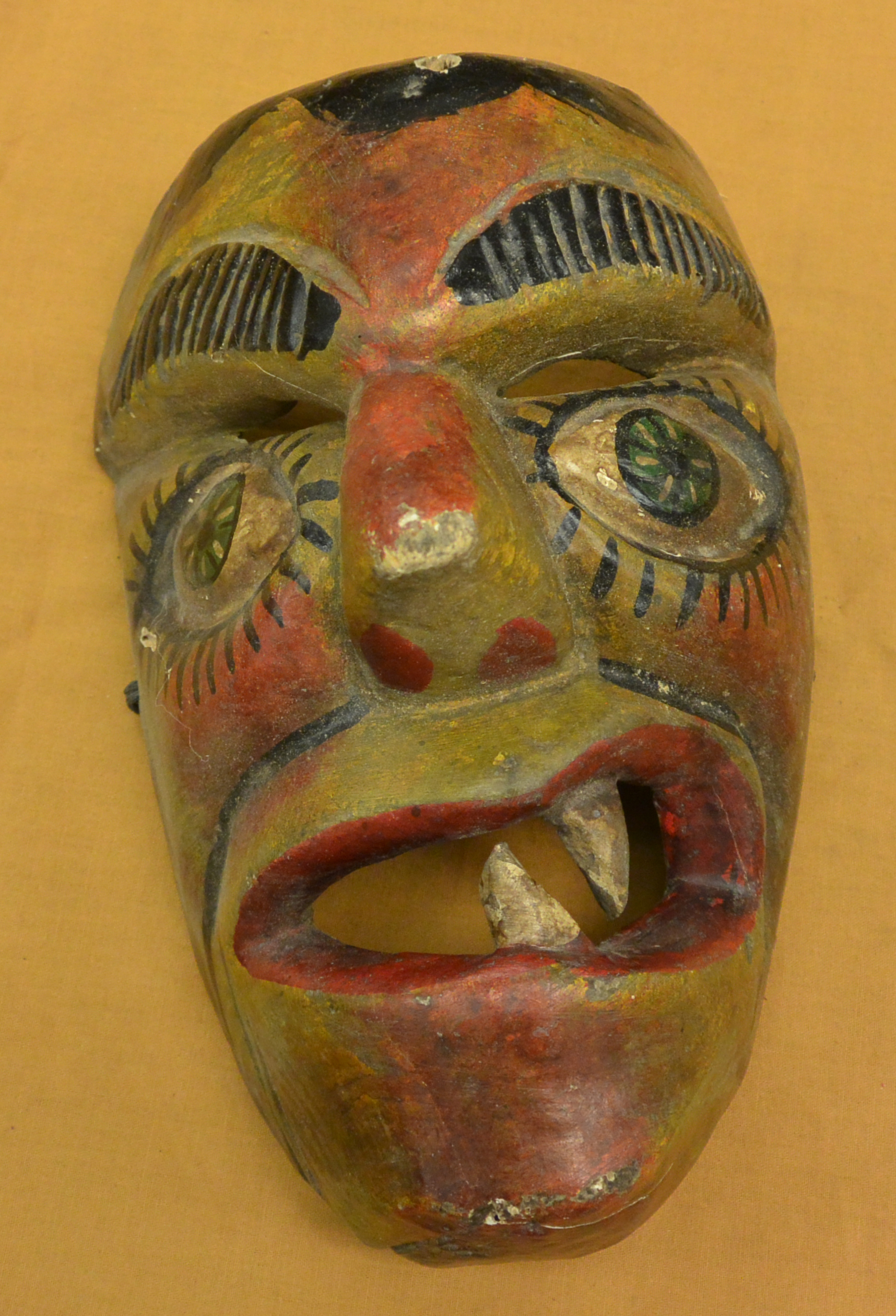 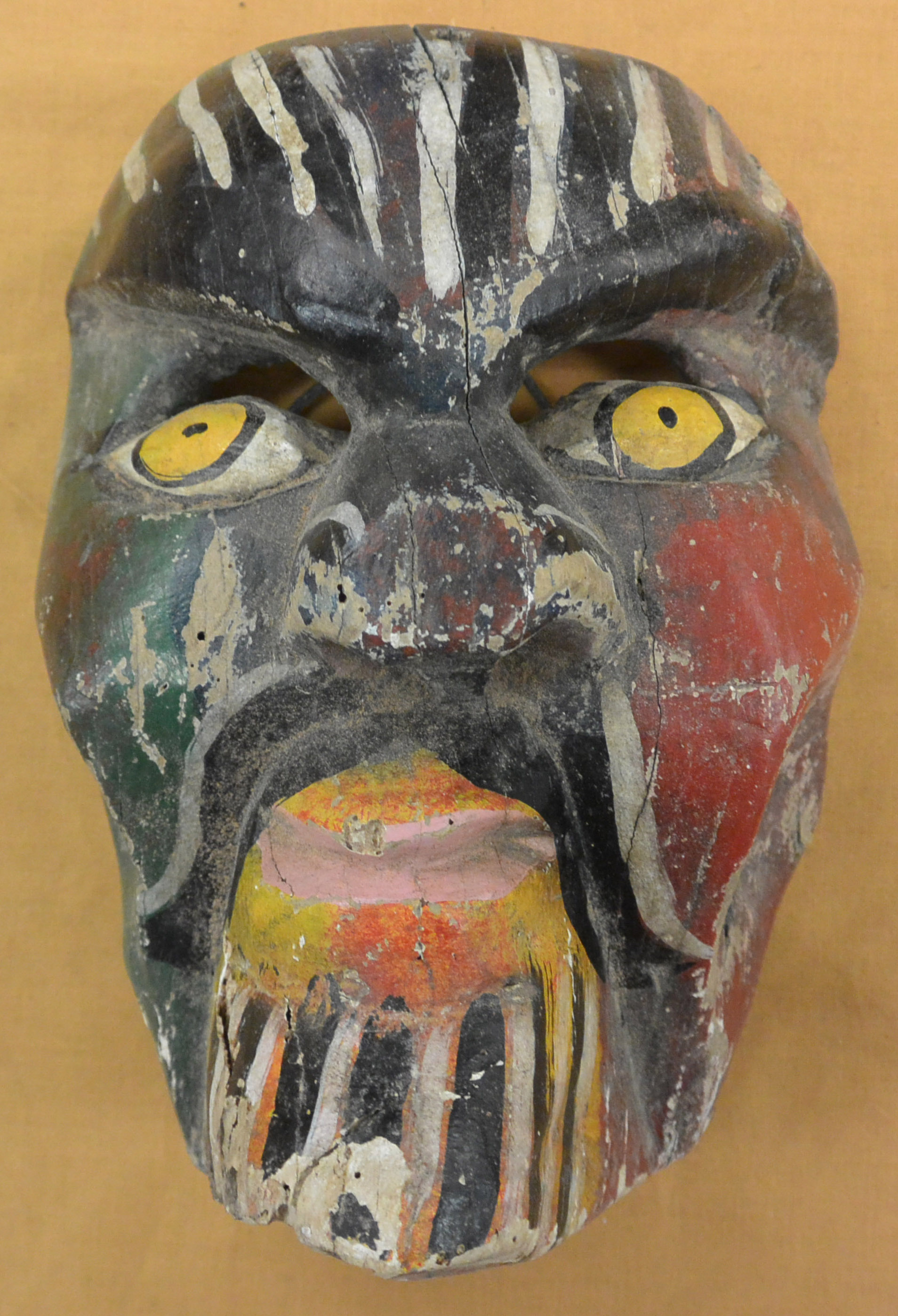 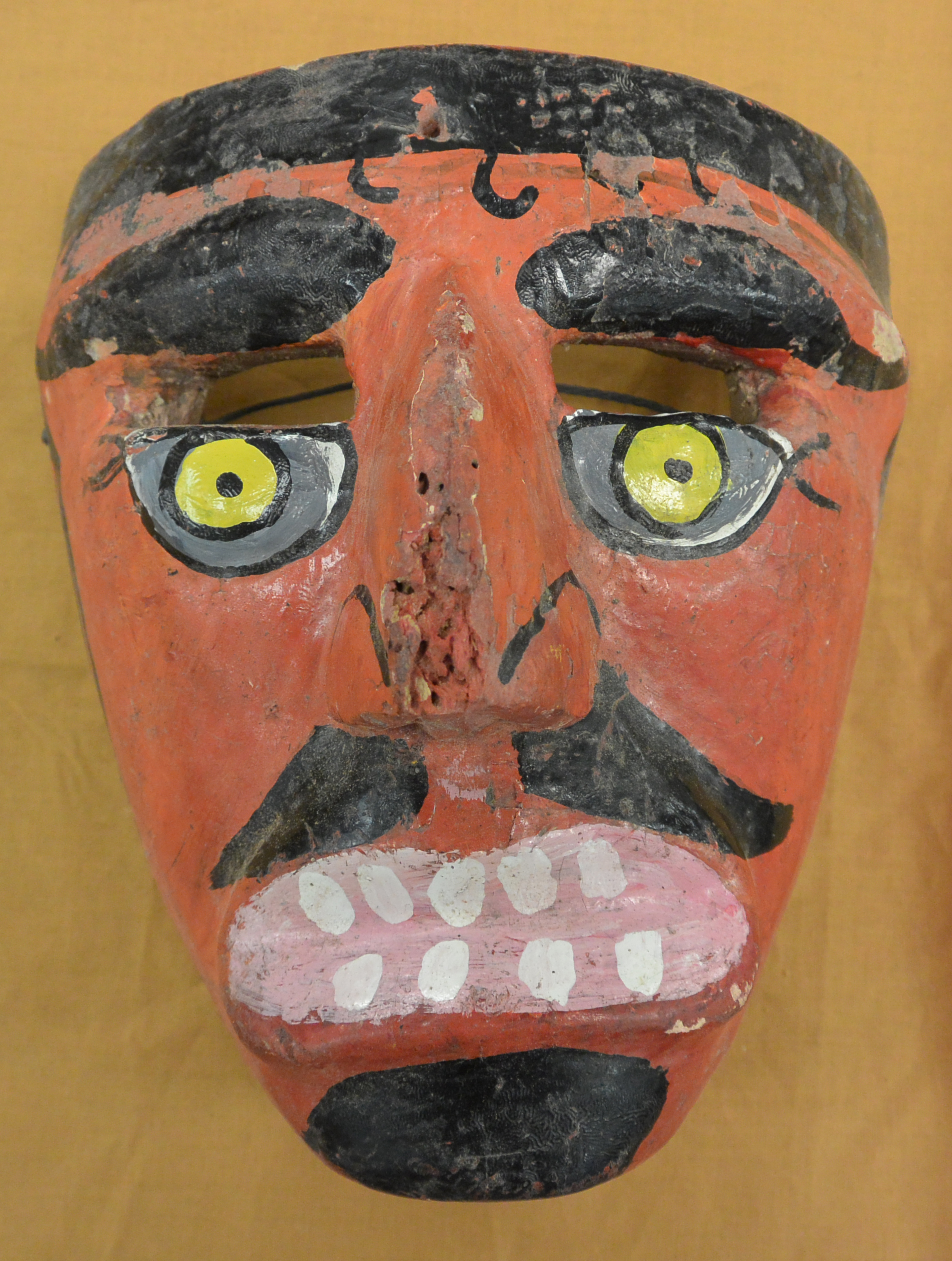 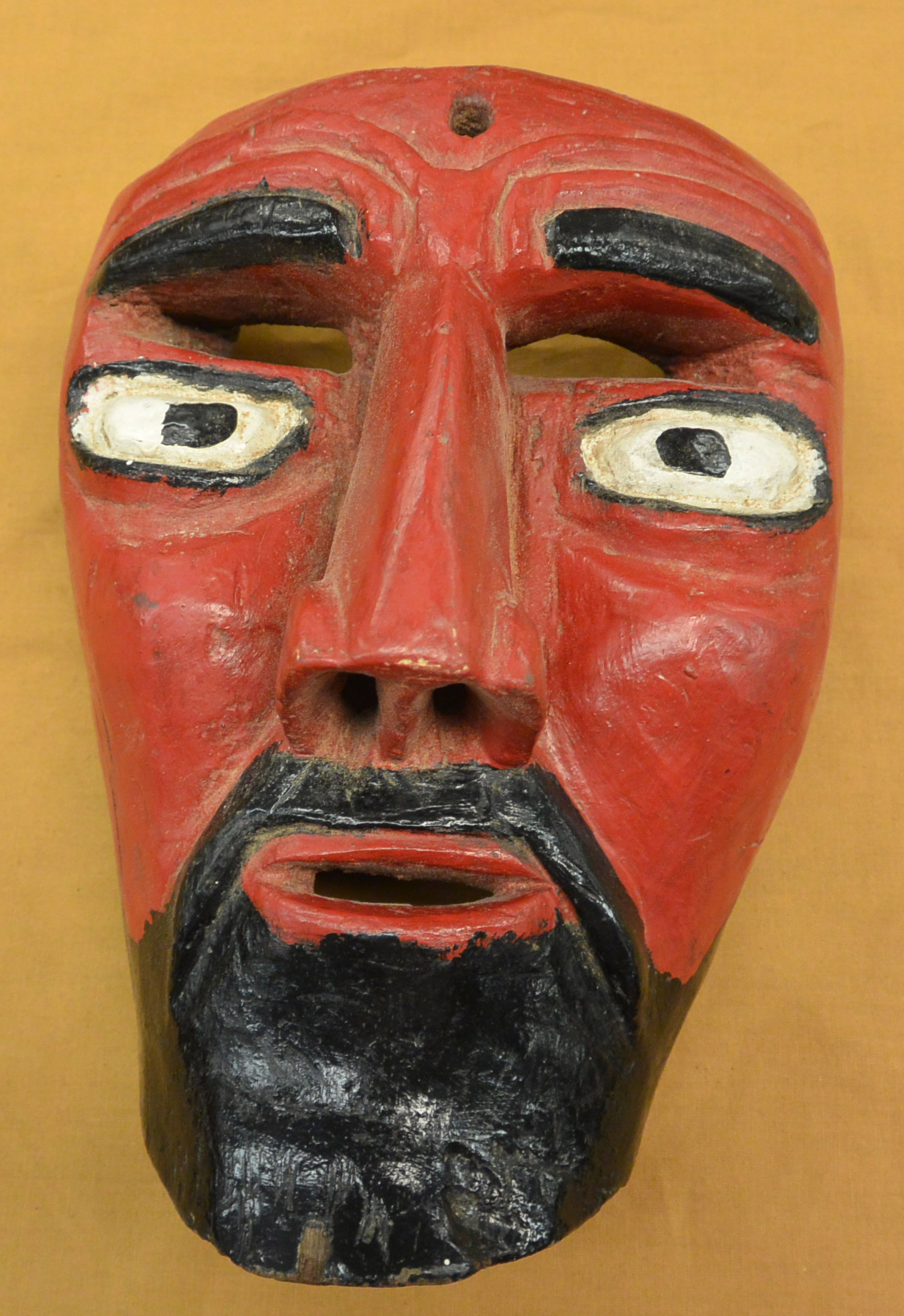 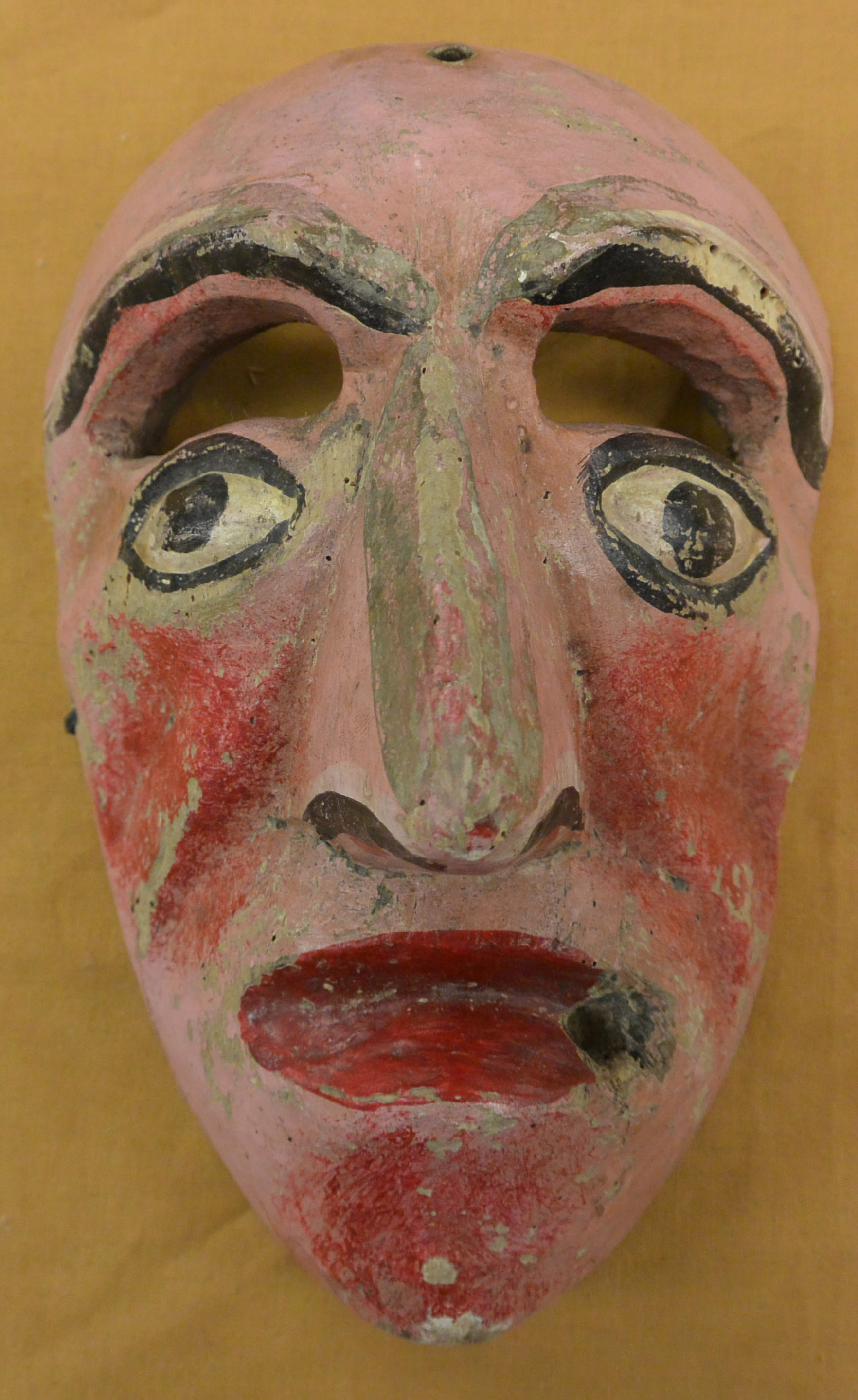