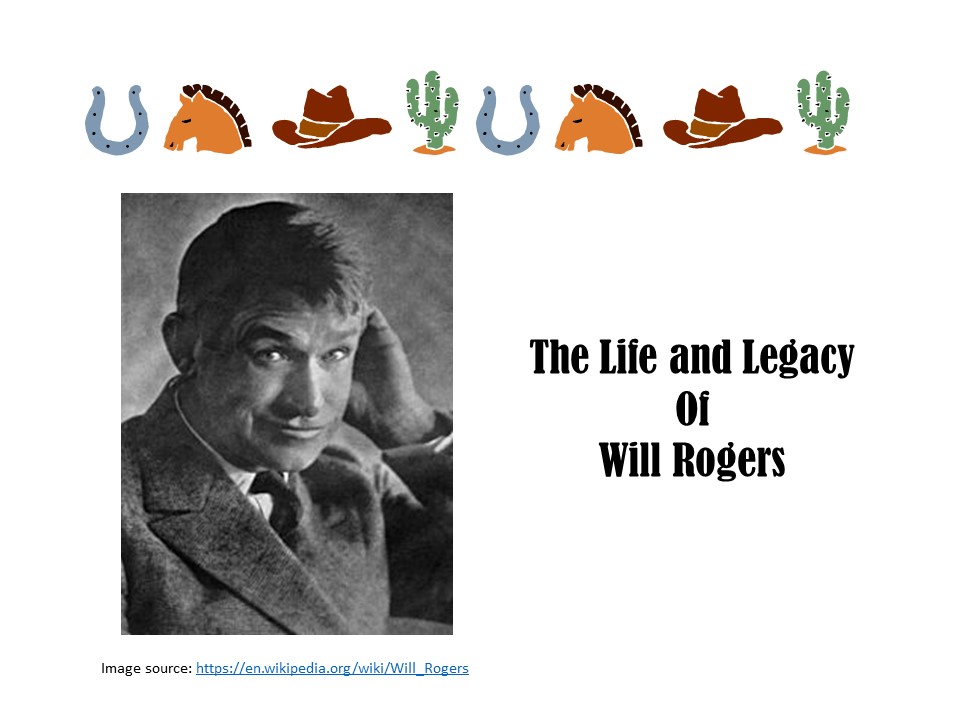 Image: Photo of Will Rogers

The Life and Legacy Of Will Rogers 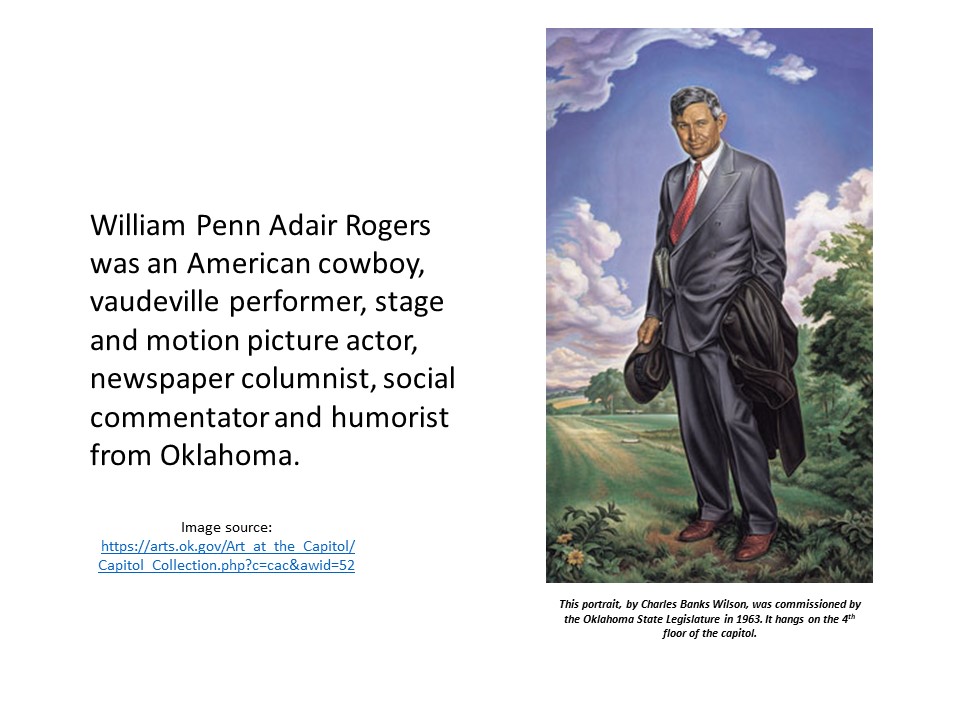 Image: Portrait of Will Rogers by Charles Banks Wilson. Commissioned by the Oklahoma State Legislature in 1963, the portrait hangs on the 4th floor of the capitol. 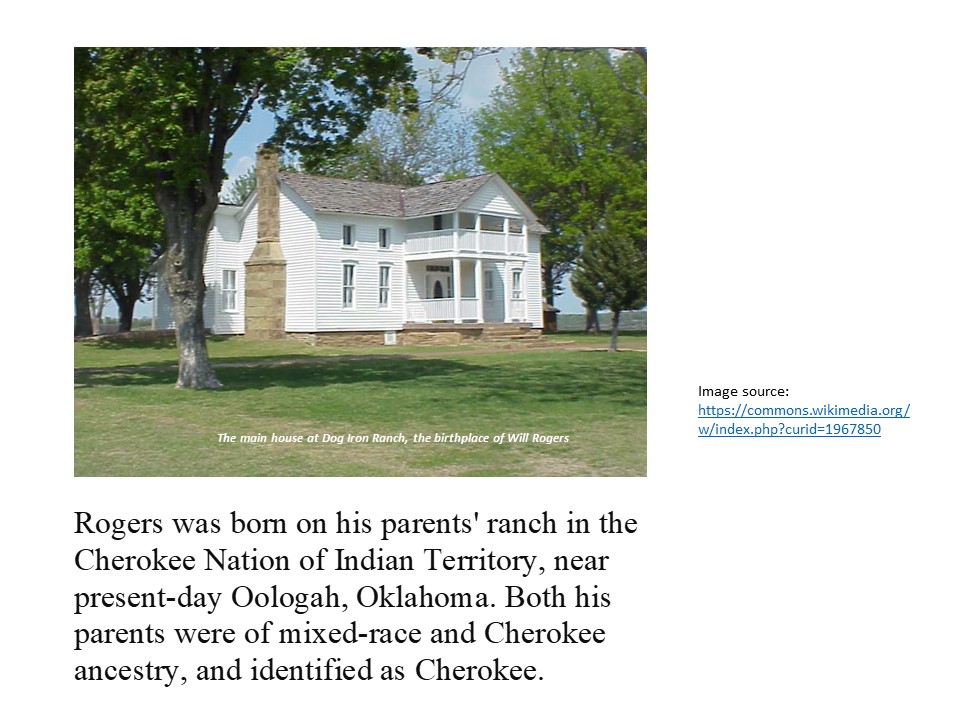 Image:Photo of the main house at Dog Iron Ranch, the birthplace of Will Rogers

Rogers was born on his parents' ranch in the Cherokee Nation of Indian Territory, near present-day Oologah, Oklahoma. Both his parents were of mixed-race and Cherokee ancestry, and identified as Cherokee. 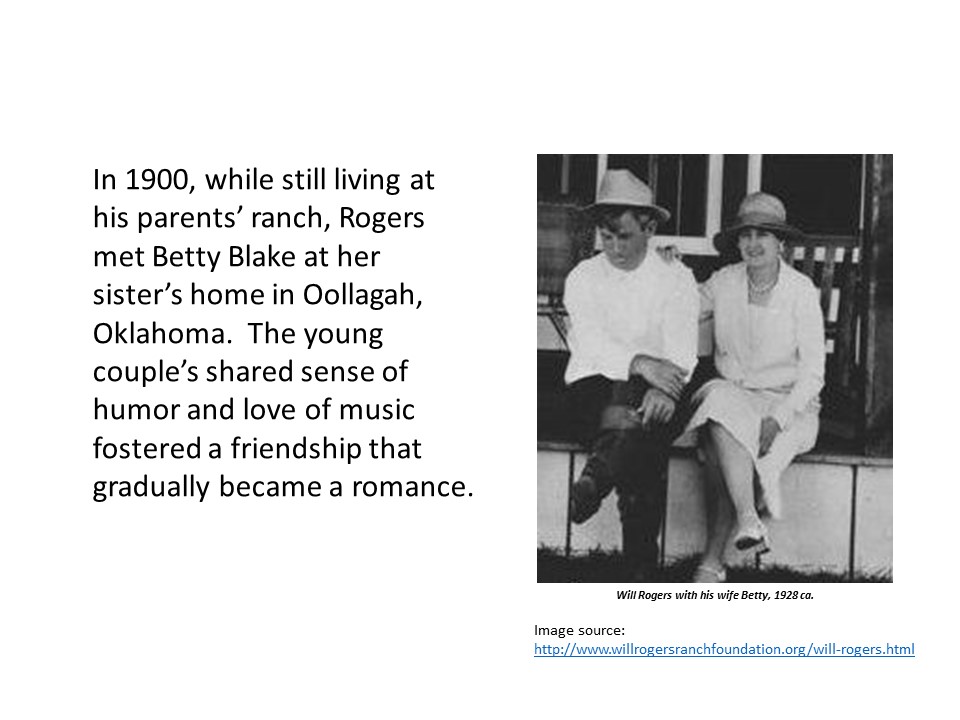 Image:photo of Will Rogers with his wife Betty, 1928 ca.

In 1900, while still living at his parents’ ranch, Rogers met Betty Blake at her sister’s home in Oollagah, Oklahoma.  The young couple’s shared sense of humor and love of music fostered a friendship that gradually became a romance. 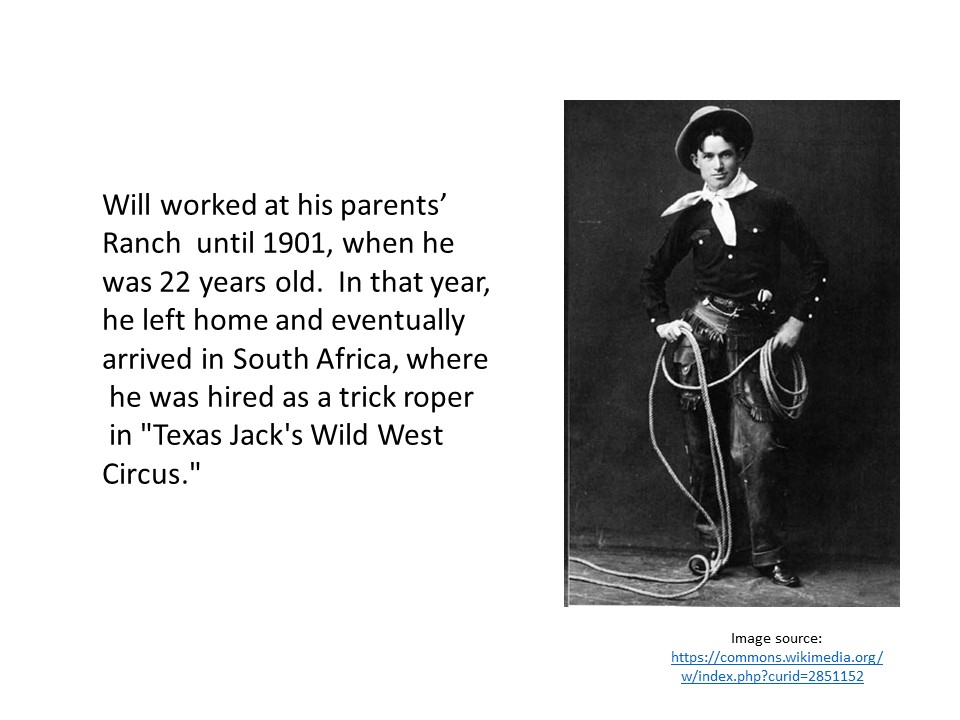 Image: Photo of young Will Rogers with lasso

Will worked at his parents’ ranch  until 1901, when he was 22 years old.  In that year, he left home and eventually arrived in South Africa, where  he was hired as a trick roper  in "Texas Jack's Wild West Circus." 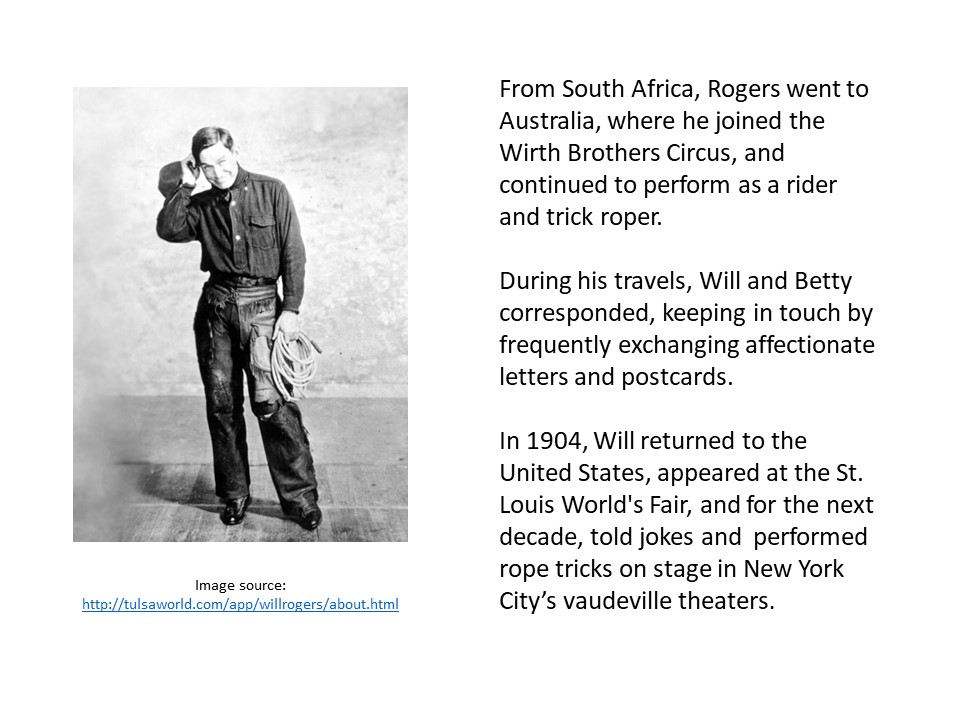 Image: photo of Will Rogers on stage

From South Africa, Rogers went to Australia, where he joined the Wirth Brothers Circus, and continued to perform as a rider and trick roper. During his travels, Will and Betty corresponded, keeping in touch by frequently exchanging affectionate letters and postcards. In 1904, Will returned to the United States, appeared at the St. Louis World's Fair, and for the next decade, told jokes and  performed rope tricks on stage in New York City’s vaudeville theaters. 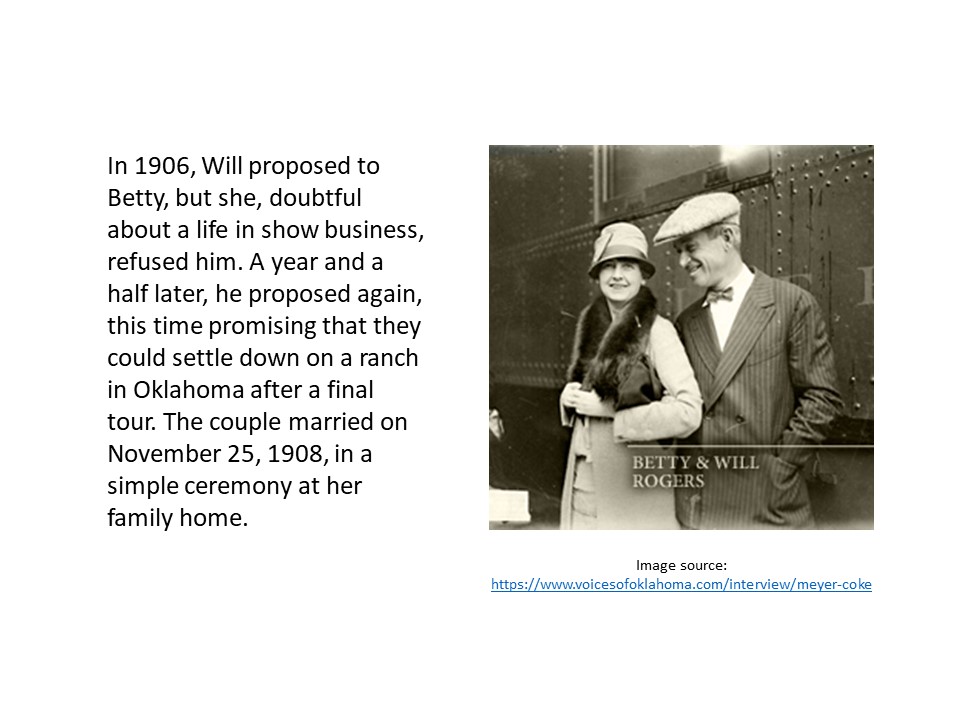 Image: photo of Will and Betty Rogers at train station

In 1906, Will proposed to Betty, but she, doubtful about a life in show business, refused him. A year and a half later, he proposed again, this time promising that they could settle down on a ranch in Oklahoma after a final tour. The couple married on November 25, 1908, in a simple ceremony at her family home. 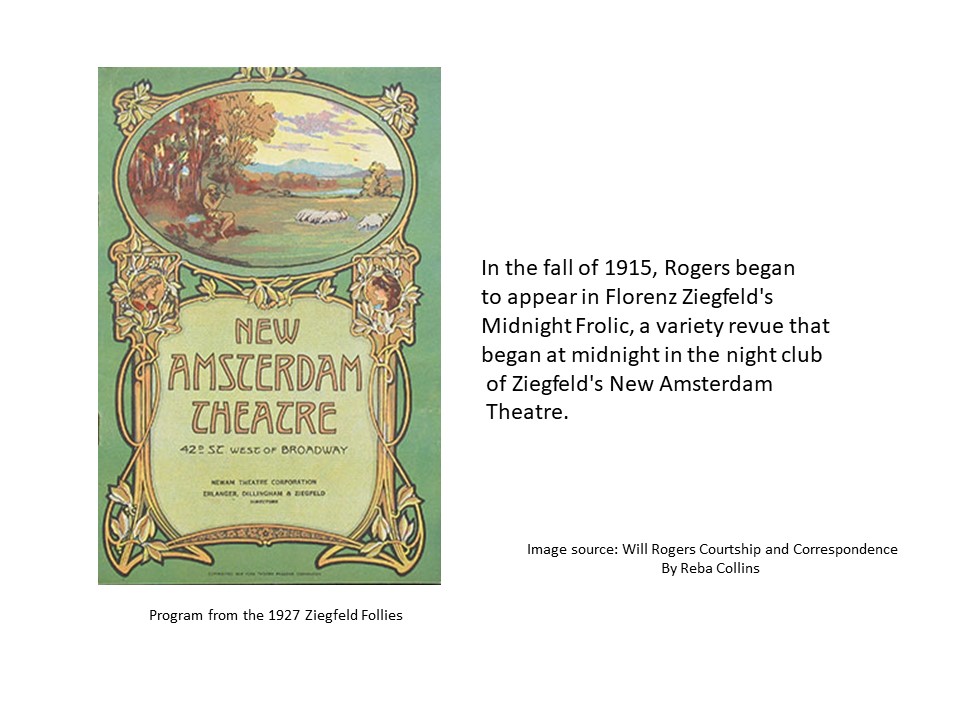 Image:Program from the 1927 Ziegfeld Follies

In the fall of 1915, Rogers began to appear in Florenz Ziegfeld's Midnight Frolic, a variety revue that began at midnight in the night club of Ziegfeld's New Amsterdam Theatre.. 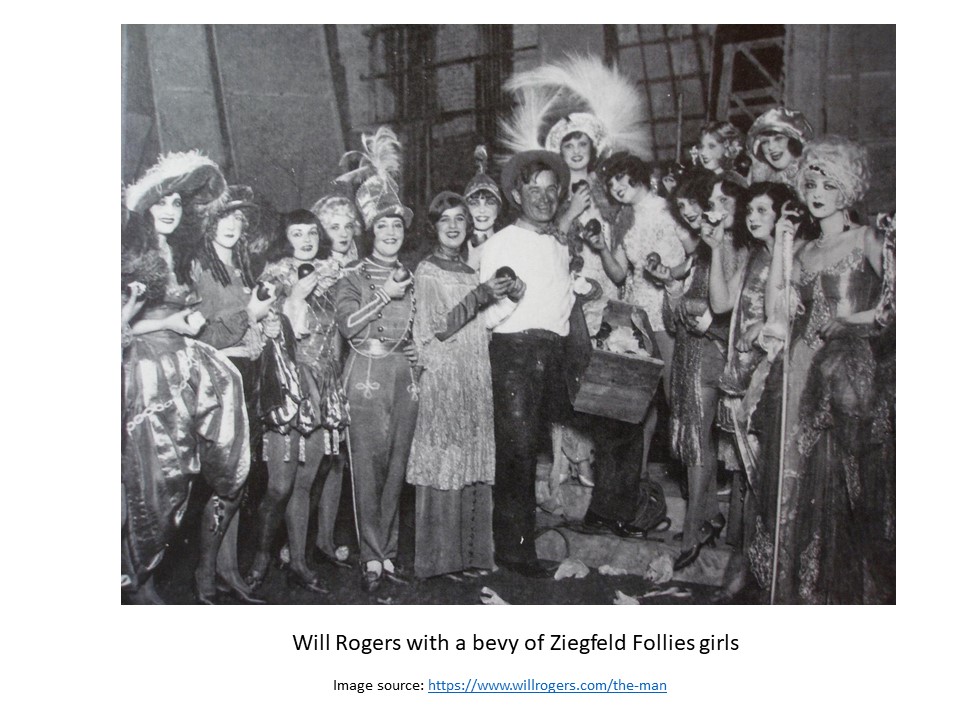 Image:Photo of Will Rogers with a group of Ziegfeld Follies girls

Image caption:Will Rogers with a bevy of Ziegfeld Follies girls 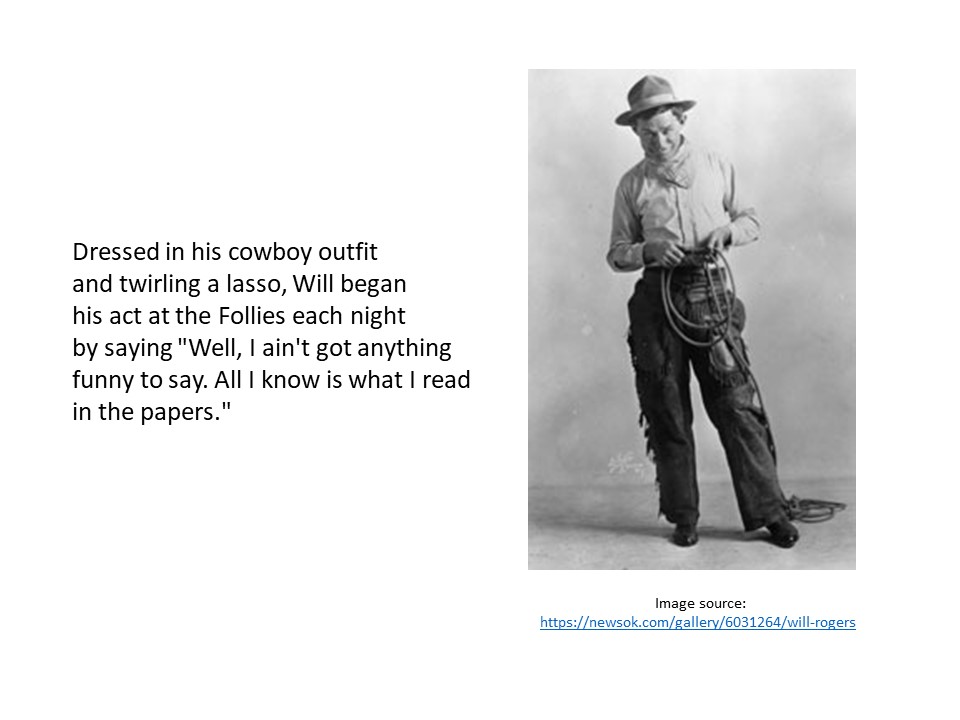 Image:photo of Will Rogers on stage with lasso

Dressed in his cowboy outfit and twirling a lasso, Will began his act at the Follies each night by saying "Well, I ain't got anything funny to say. All I know is what I read in the papers." 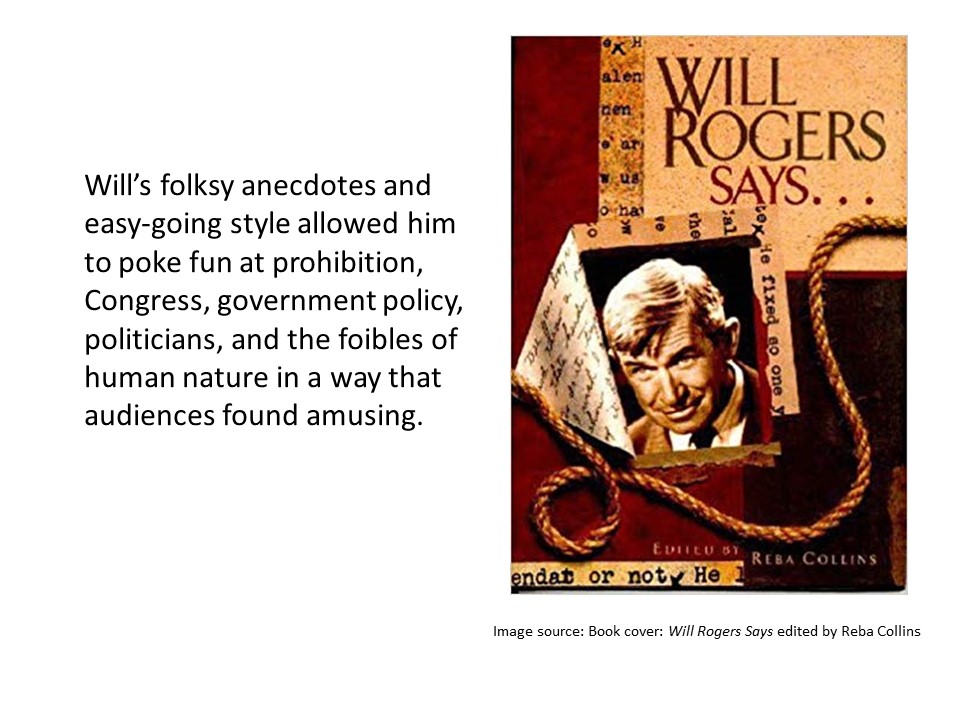 Will’s folksy anecdotes and easy-going style allowed him to poke fun at prohibition, Congress, government policy, politicians, and the foibles of human nature in a way that audiences found amusing. 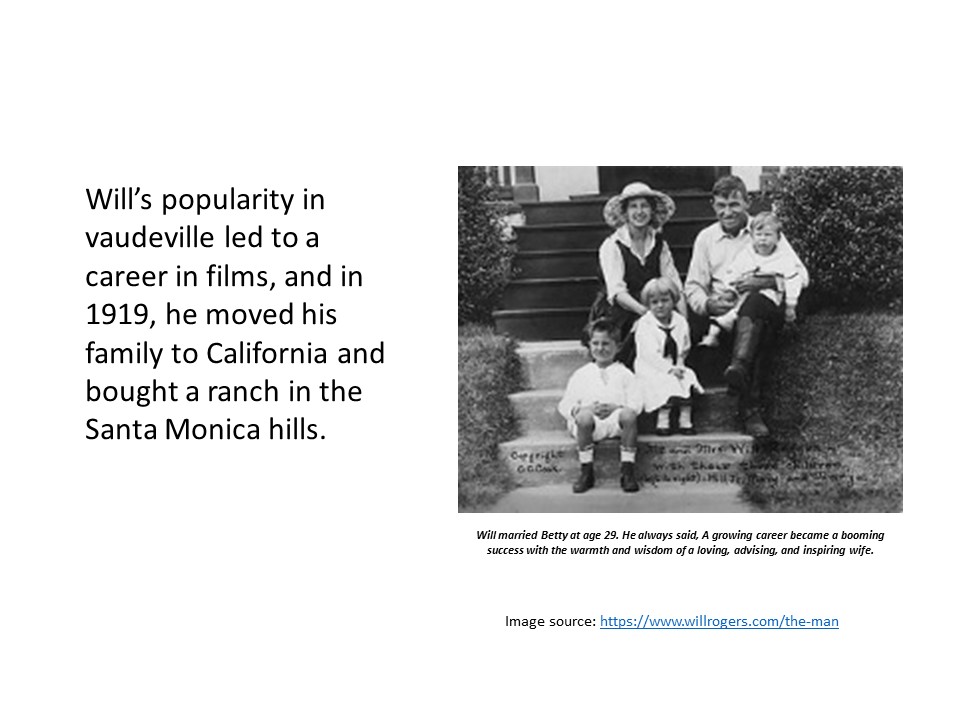 Image: photo of Will and Betty Rogers and their children

Image caption:Will married Betty at age 29. He always said, A growing career became a booming success with the warmth and wisdom of a loving, advising, and inspiring wife.

Will’s popularity in vaudeville led to a career in films, and in 1919, he moved his family to California and bought a ranch in the Santa Monica hills. 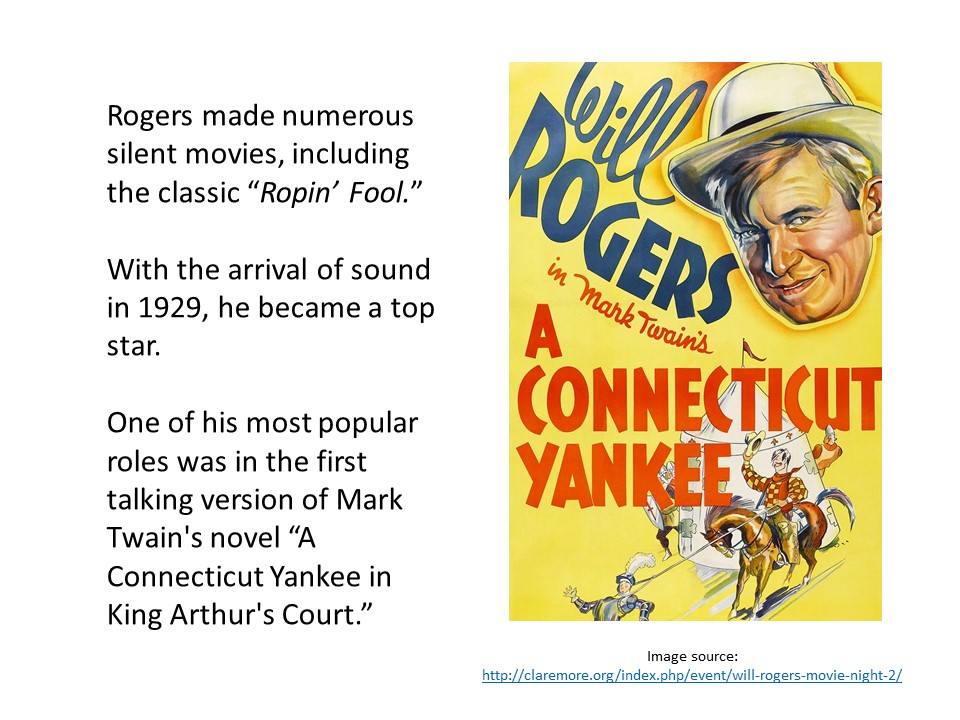 Image: Movie Poster for "A Connecticut Yankee" starring Will Rogers

Rogers made numerous silent movies, including the classic “Ropin’ Fool.”  With the arrival of sound in 1929, he became a top star. One of his most popular roles was in the first talking version of Mark Twain's novel “A Connecticut Yankee in King Arthur's Court.” 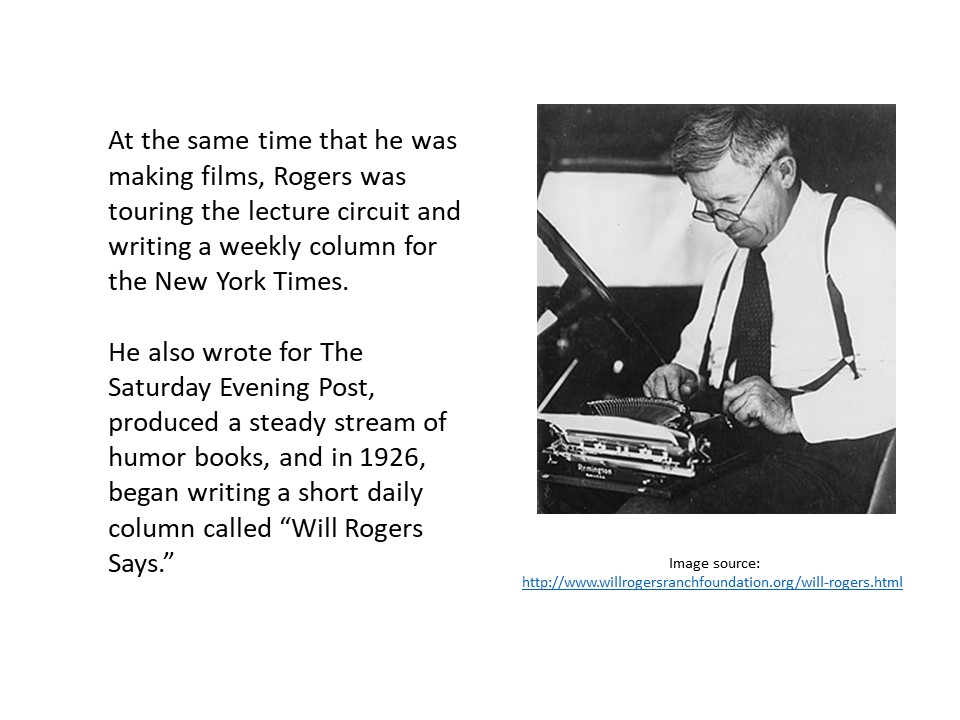 Image: Photo of Will Rogers typing

Will ‘s popularity on the lecture circuit and in print led inevitably to work in radio, with Will broadcasting his newspaper pieces from 1929 to 1935. 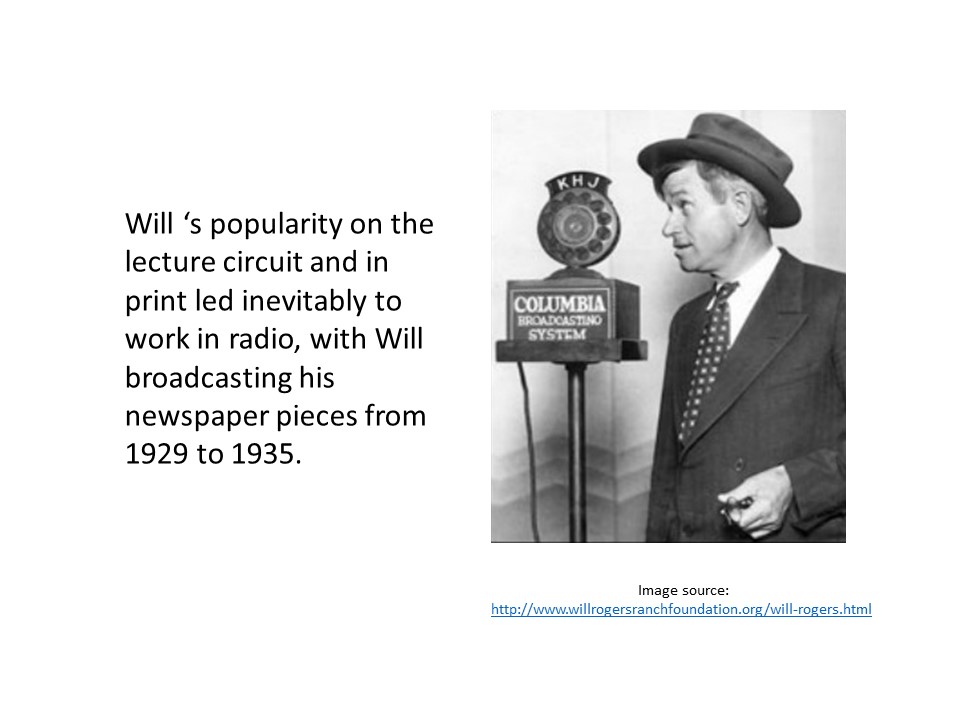 Image:photo of Will Rogers at Columbia Broadcasting

Will ‘s popularity on the lecture circuit and in print led inevitably to work in radio, with Will broadcasting his newspaper pieces from 1929 to 1935. 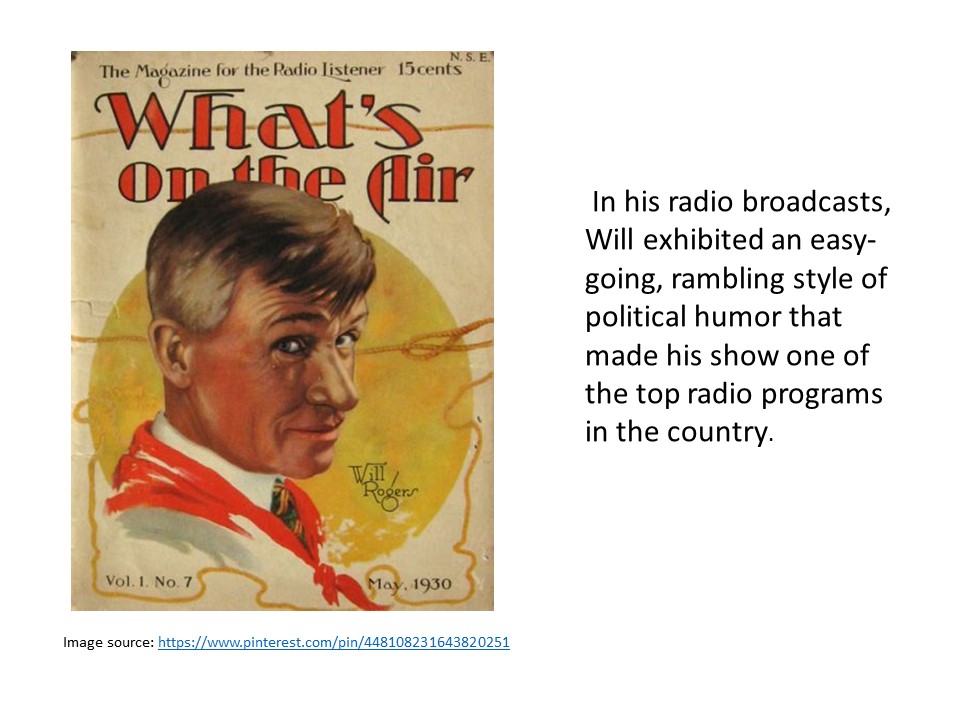 Image:Portrait of Will Rogers on the cover of "What's on the Air?" magazine in March 1930

In his radio broadcasts, Will exhibited an easy-going, rambling style of political humor that made his show one of the top radio programs in the country. 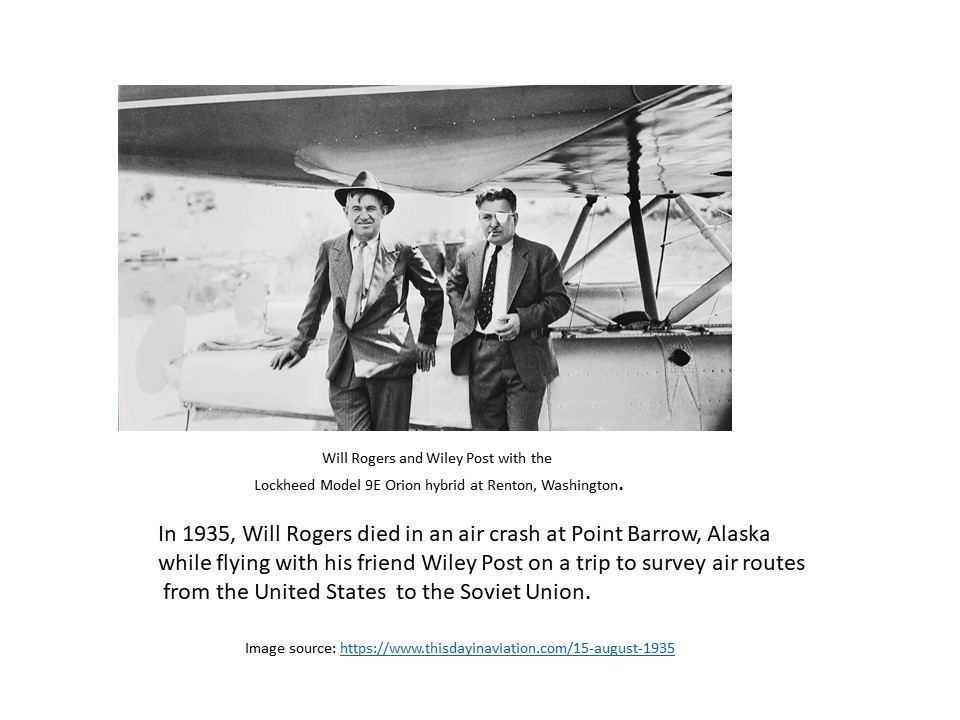 In 1935, Will Rogers died in an air crash at Point Barrow, Alaska while flying with his friend Wiley Post on a trip to survey air routes  from the United States  to the Soviet Union. 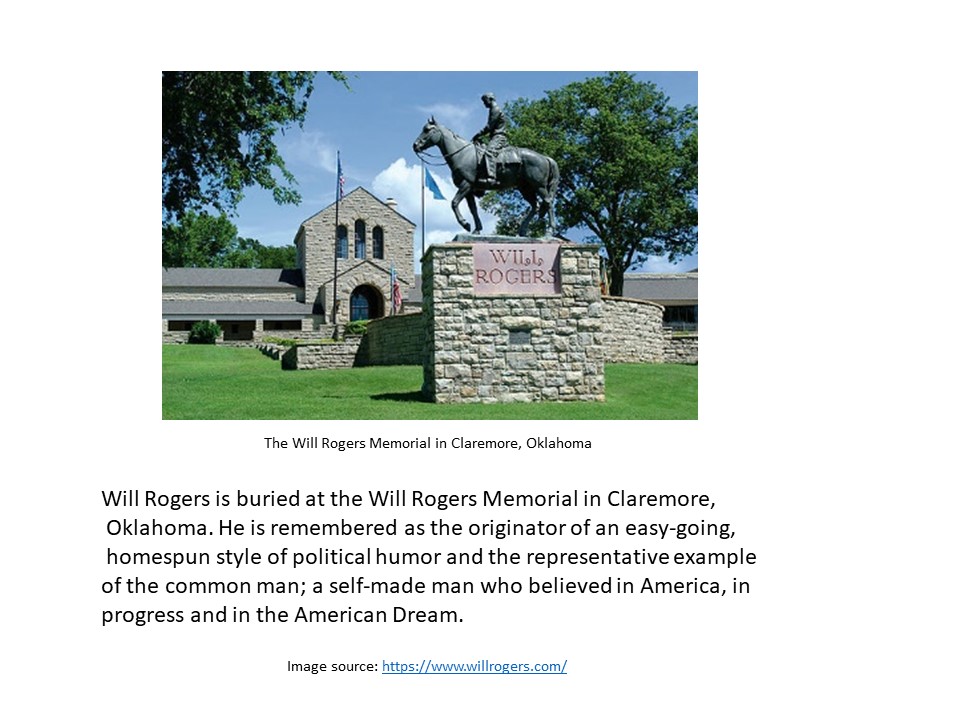 Image:Photo of the Will Rogers Memorial in Claremore, Oklahoma

Will Rogers is buried at the Will Rogers Memorial in Claremore, Oklahoma. He is remembered as the originator of an easy-going, homespun style of political humor and the representative example of the common man; a self-made man who believed in America, in progress and in the American Dream. 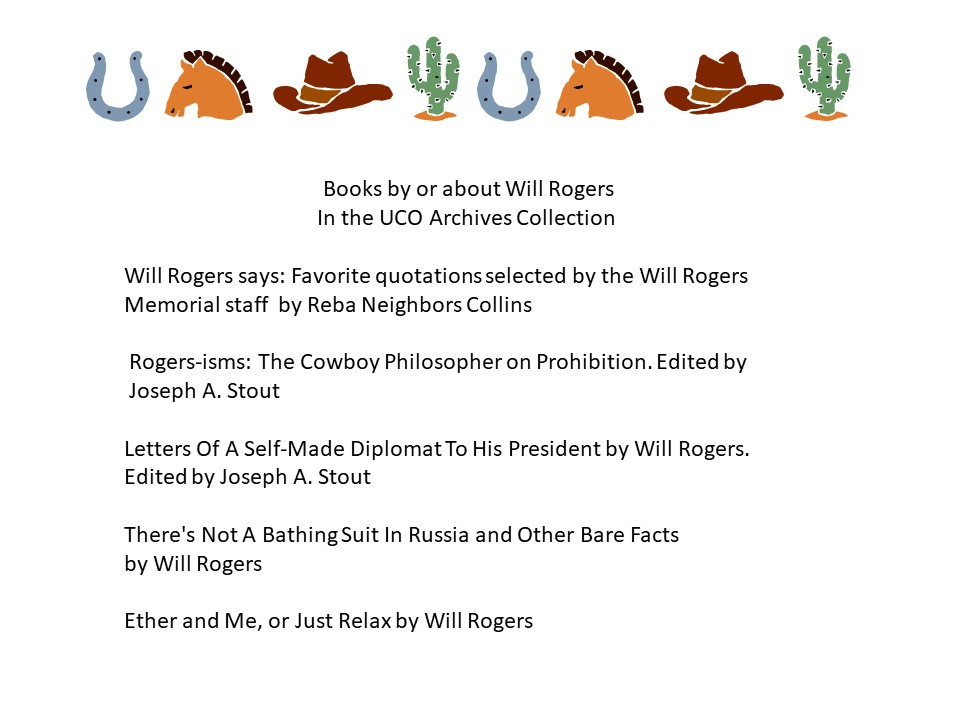 Books by or about Will Rogers In the UCO Archives Collection

Will Rogers says: Favorite quotations selected by the Will Rogers Memorial staff  by Reba Neighbors Collins

Rogers-isms: The Cowboy Philosopher on Prohibition. Edited by  Joseph A. Stout

Letters Of A Self-Made Diplomat To His President by Will Rogers. Edited by Joseph A. Stout

Ether and Me, or Just Relax by Will Rogers 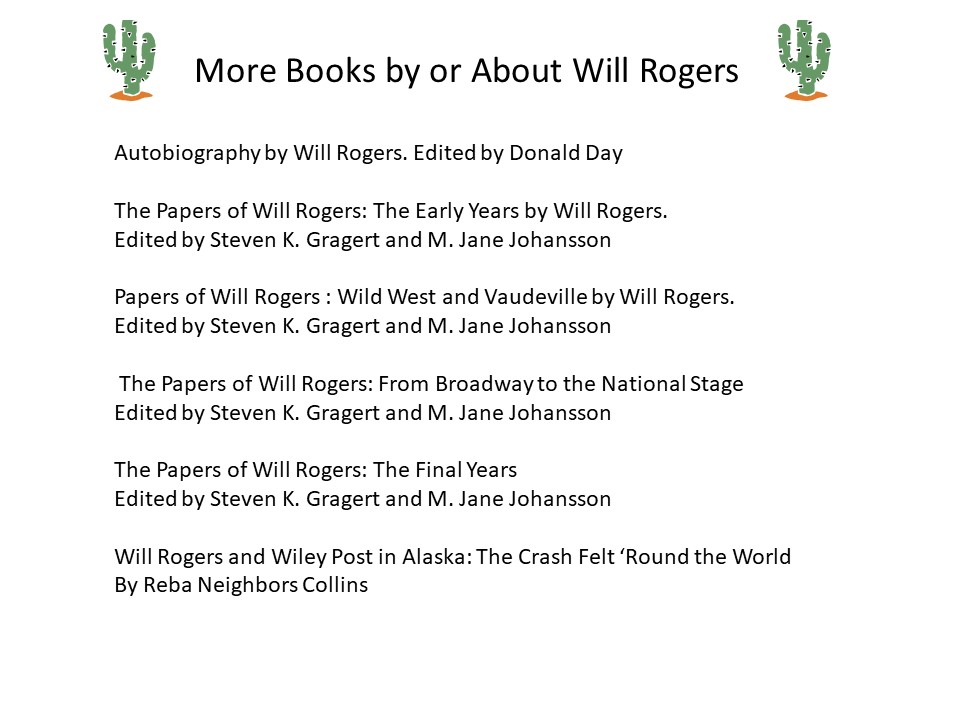 More Books by or About Will Rogers

Autobiography by Will Rogers. Edited by Donald Day

The Papers of Will Rogers: The Early Years by Will Rogers. Edited by Steven K. Gragert and M. Jane Johansson

Papers of Will Rogers : Wild West and Vaudeville by Will Rogers. Edited by Steven K. Gragert and M. Jane Johansson

The Papers of Will Rogers: From Broadway to the National Stage Edited by Steven K. Gragert and M. Jane Johansson

The Papers of Will Rogers: The Final Years Edited by Steven K. Gragert and M. Jane Johansson

Will Rogers and Wiley Post in Alaska: The Crash Felt ‘Round the World by Reba Neighbors Collins 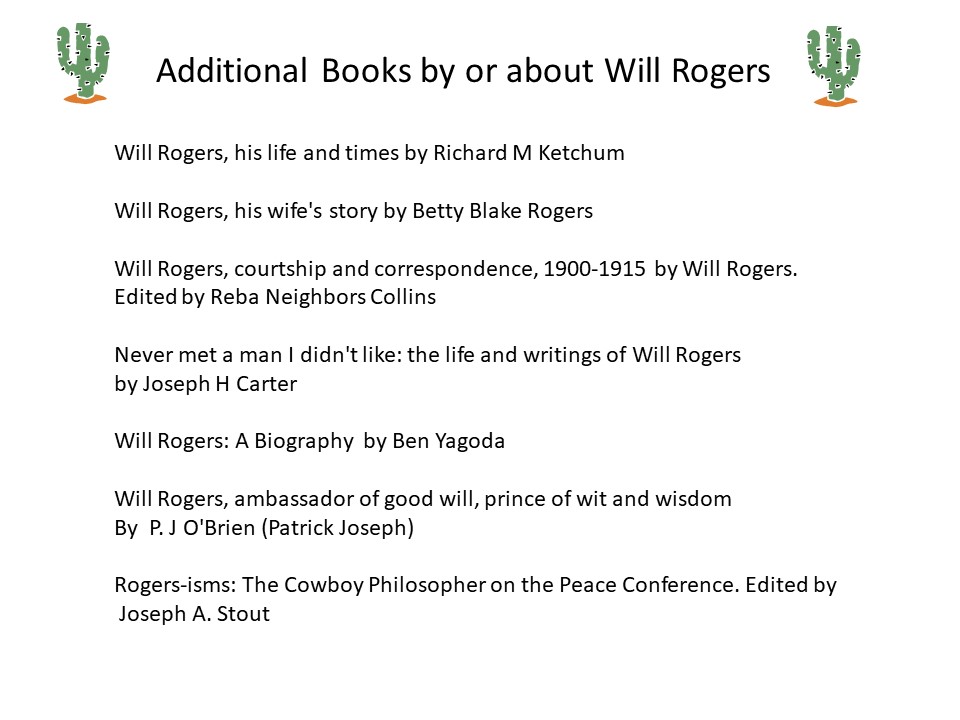 Additional Books by or about Will Rogers

Will Rogers, his life and times by Richard M Ketchum

Will Rogers, his wife's story by Betty Blake Rogers

Willl Rogers, courtship and correspondence, 1900-1915 by Will Rogers. Edited by Reba Neighbors Collins

Never met a man I didn't like: the life and writings of Will Rogers by Joseph H Carter

Will Rogers: A Biography  by Ben Yagoda

Will Rogers, ambassador of good will, prince of wit and wisdom by  P. J O'Brien (Patrick Joseph)

Rogers-isms: The Cowboy Philosopher on the Peace Conference. Edited by Joseph A. Stout 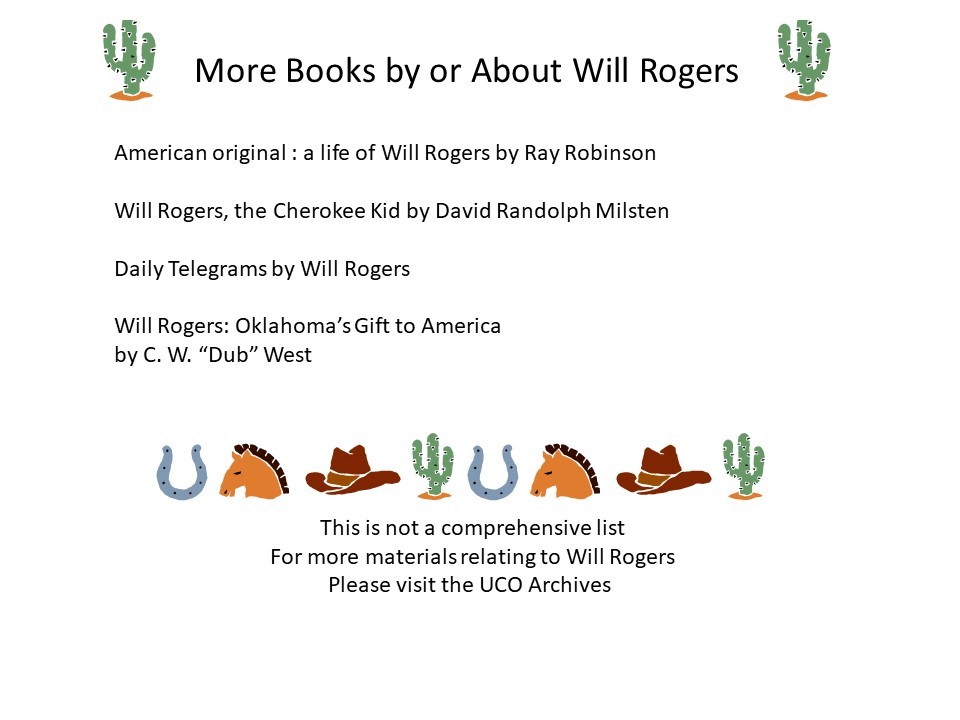 More Books by or About Will Rogers

American original : a life of Will Rogers by Ray Robinson

Will Rogers, the Cherokee Kid by David Randolph Milsten

Daily Telegrams by Will Rogers

This is not a comprehensive list.  For more materials relating to Will Rogers please visit the UCO Archives