What does the mural depict? 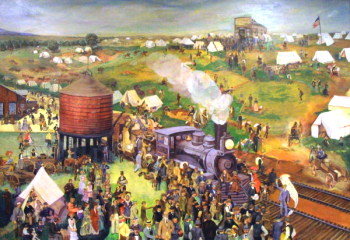 The Oklahoma Urban Land Rush is a mural presenting the scene at Guthrie, Oklahoma, on April 22, 1889, on the arrival of the first train from the north. The people in the mural have been verified to have been on the scene that day. (view larger image)

She and her husband were missionary volunteers to the Turks and Calicos Islands, British West Indies, and she is a graduate of the Southwestern Baptist Theological Seminary with a diploma in Religious Education.

A recognized portrait painter, she has completed many oil and watercolor portraits. She frequently combines her artistic talent with other endeavors including not only her interest in Southwestern history, but also her church work.

In an interview with The Daily Oklahoman on June 27, 1989, she said that research on the engine number of the train pulling into town took more time than any other question. Says the article, "It took Guffey hours of research and two trips to Topeka to ferret out the number 866 as the lucky engine" among 360 possible engines on the Santa Fe Railroad line. 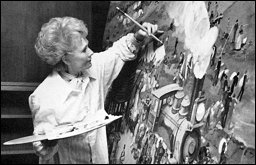 During discussions with history professor Dr. Don Green about a master's project, the subjects of the Oklahoma Land Rush and the City of Guthrie were offered. The excitement of the historical periods and the importance of the city made this a natural choice. Dr. John L. Lolley, Director of the Central State University Library, was enthusiastic about the prospect of a mural based on this historic episode, and encouraged Guffey to think further about the subject and consider a triptych.

The research for the mural consumed more than three years of study in the Central State University Library and Oklahoma Collection. Further study involved searching out every available photograph, newspaper article, books about trains, and information about the Oklahoma run and the people of that era in Oklahoma history.

A major source of information, including court testimony and land surveys, were The Oklahoma Townsite Cases, the actual court documents used to settle claim disputes following the historic Run of April 22, 1889, and the other land openings in the state.

Following the decision to make the project a mural five and a half feet by eight feet, the frame and canvas were prepared with the help of Michael Bachi, CSU art professor.

In addition, Guffey sought to prove the historical presence of the railroad station, the water tower and the land office. The figures illustrated are historically accurate and represent persons for whom positive proof is available from a variety of sources including the Townsite Cases, newspapers of the era, and existing photographs.

The mural was dedicated to Central State University on May 2, 1989, at the Night Institute "Salute to the Armed Forces." One of the very first military responsibilities in the new territory was the management of the Land Run of 1889. The military is mentioned prominently in the historical records and is featured in the mural.

Governor George Nigh, Statesman-in-Residence at Central State University, long a patron of the arts and a former history teacher, presented the mural as an example of art and history working hand in hand to further the education of Oklahomans about the exciting history of the state of Oklahoma.

Guffey's master's thesis is available in the Archives & Special Collections. The title is The Oklahoma Urban Land Rush and the call number is LD4294.07ja G842x. The thesis provides background notes on the setting as well as a key to the identity and details on the people depicted.