By far the most ornate art object in the library is the wooden statue of Garuda, a bird-god of the Hindu religious tradition.

The piece is assembled from several carved wood sections and is approximately 5.5 feet tall and 4 feet in diameter. The statue, on the third floor north, is from the Balinese art-carving tradition.

Despite his fearsome appearance, Garuda is said to have brought the nectar of the gods for healing. He is not a completely sympathetic figure, however, since he is said to be part of a race of unmerciful bird-creatures and is sometimes depicted as flying with Vishnu on his back, the creator/destroyer in the Hindu pantheon.

The figure of Garuda is one of the most ancient religious images. He is mentioned in some of the oldest literature to survive to the present day, the Vedas. Some Vedic writings are up to 3,500 years old, but Hindu oral traditions go back much further. 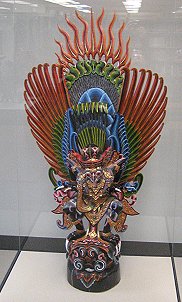 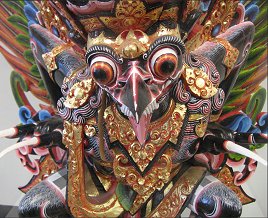