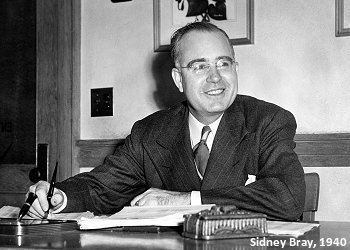 Sidney Bray was born August 22, 1899, on a ranch near Bowie, Texas to Thomas William and Martha Winkler Bray. Bray, whose father the Oklahoma town of Bray is named after, served in state and regional directorship positions with the U.S. Treasury for 23 years.

After serving in WWI, Bray joined General Motors in sales management. The highest award bestowed upon Bray for accomplishments was the Albert Gallatin Award presented by the U.S. Treasury Department when he retired in 1965.

Bray directed nearly a billion and a half dollars worth of sales in the World War II Bond Drives. While serving as Regional Director of the Bond Division for seven south central states, he directed award-winning savings bonds campaigns for the U.S Treasury Department. In 1983 he was inducted into Edmond's Hall of Fame. He was known as a champion fund raiser for worthy projects.

The School at War Scrapbooks collection was prepared from 1942-1943 by 253 individual Oklahoma schools, both private and parochial. The scrapbooks document each school's efforts to support WWII. All of the scrapbooks list the school's name, number of students enrolled, number of teachers, and dollar amount of scrap gathered. Images in the scrapbooks include school buildings, students, towns and cities where schools are located. The scrapbooks also contain short school histories, compositions and drawings by students and newspaper clippings.
View scrapbooks in ShareOK Repository